Please login for full access to exclusive articles, podcasts and videos relating to the medical, aerospace and automotive segments.

The task faced by aerospace manufacturers over the next decade will be to cut the lifecycle greenhouse gas  emissions of their planes in any way possible.

Over the next decade, aircraft manufacturers will have to cut the greenhouse gas emissions of their planes in any way possible.

“The aerospace industry is really going to be in the spotlight because the decarbonisation of land-based transport is going to happen fairly quickly,” predicts Stewart Dawson from the UK’s Advanced Manufacturing Research Centre (AMRC).

ADS, the trade body for UK aerospace manufacturers has projected that aerospace will be the most polluting transport sector by 2050, as air traffic grows and emissions from cars and trucks shrink dramatically.

When it comes to manufacturing aerostructural components, cutting lifecycle emissions is likely to force an end to milling components from solid blocks, and eventually mean a shift towards the so-called “circular factory”.

Aerospace manufacturers and their suppliers have historically sought to reduce emissions by focusing on the energy use within factories. But a detailed lifecycle analysis carried out by High Value Manufacturing Catapult  last year   found that that factories themselves make an almost insignificant contribution.

Drawing on data collected from several of the UK’s biggest aerospace manufacturers, the researchers discovered that more than 90 percent of the energy embodied in a finished plane is contained within the materials before they even reach the factory door.

“It’s been a massive blind spot for the industry,” argues Dawson, who is responsible for Future Propulsion and Sustainable Manufacturing, as well as hydrogen.

“Aerospace manufacturers are focused very much on energy efficiency within the factory. But the analysis shows that that’s not the place to focus your efforts.”

Titanium, aluminium, and carbon fibre, the chief materials used for most structural aerospace components are highly energy-intensive, especially titanium which is often produced in countries, such as Russia, Kazakhstan and China, where coal and gas are the dominant energy sources used in the material’s primary production.

As the jet fuel an aircraft burns over its life generates about 100 times more emissions than those generated during its manufacture, the materials’ low weight more than offsets the emissions released in making them.

But their production releases significant emissions nonetheless. To reduce them, Dawson believes manufacturers need to focus on improving the “buy-to-fly ratio”, the proportion of titanium, aluminium and carbon fibre purchased which ends up in finished planes.

Using current subtractive manufacturing techniques, as much as 90 percent of the aluminium and 75 percent of the titanium used to make a typical structural component is simply milled away.

Seco Tools specialises in tooling solutions for aircraft pylons, but the way these parts are made is changing as sustainability takes priority.

“It takes 800 megajoules of energy to produce a kilogram of titanium, and if you have a manufacturing process with a buy-to-fly ratio of four to one, then you’ve just thrown 600 megajoules straight in the swarf bin,” Dawson explains.

Avoiding this will require moving to so-called near-net-shape manufacturing techniques, such as structural casting and bulk additive manufacturing.

Structural components such as engine pylons are today produced though  forging, when the metal is heated until it becomes malleable, squeezed into an approximation of the required shape, and then milled.

It is only in the last few years that new accelerated cooling casting techniques have made it possible to produce titanium castings strong enough to use for aerostructural applications.

This involves flowing chilled argon gas over the casting so that the component cools sufficiently rapidly to prevent the formation of large crystal grains which would otherwise lower its fracture toughness.

“Accelerated cooling techniques which prevent grain growth will allow structural castings to be competitive with forgings on mechanical properties.”

Regulators have yet to certify that components produced by “bulk additive manufacturing”, a heavy-duty version of 3D printing, are safe to fly,  although Dawson believes that Wire Arc Additive Manufacturing (WAAM), which works like a continuous welding process, will soon be able to demonstrate to them that the required mechanical properties and in-service performance can be met.

“It’s coming down the line for sure, and a lot of big  companies are investing a lot of time and energy on this because of the imperative to get to near-net.”

The shift in manufacturing techniques will reduce the sheer amount of milling required, but will make what remains more complicated.

The surface and shape of what comes out of a near net shape casting or bulk addititive manufacturing process will be less predictable than machine from solid, so each piece may need to be assessed individually before milling. This could be done by an engineer or by a machine using an automated touch probe.

A Bulk Additive Manufacturing (BAM) cell is a robotic cell capable of building high-integrity parts from the ground up, and adding metal features to large forgings such as pressure vessels.

While robots are replacing operators for some simpler ‘craft-level’ tasks, the industry and authorities will need to address a growing shortage of technician-level skills.

The workpieces may also be less stiff and more prone to vibration, causing issues with fixturing. Finally, they may have an uneven surface texture, which will need to be corrected in finishing.

This makes it even more imperative that the industry acts to overcome a growing shortage of skilled labour.

“In the past, you’d need craft-level skills for machine tool operators, and it’s now moving much more towards technician-level skills,” Dawson argues. “One way of approaching this is to increase the level of automation and try and overcome the skills deficit that way.”

But he believes that national governments should also intervene to increase the supply of skilled technicians and engineers, and that if they do not, the big aerospace companies should step in themselves. 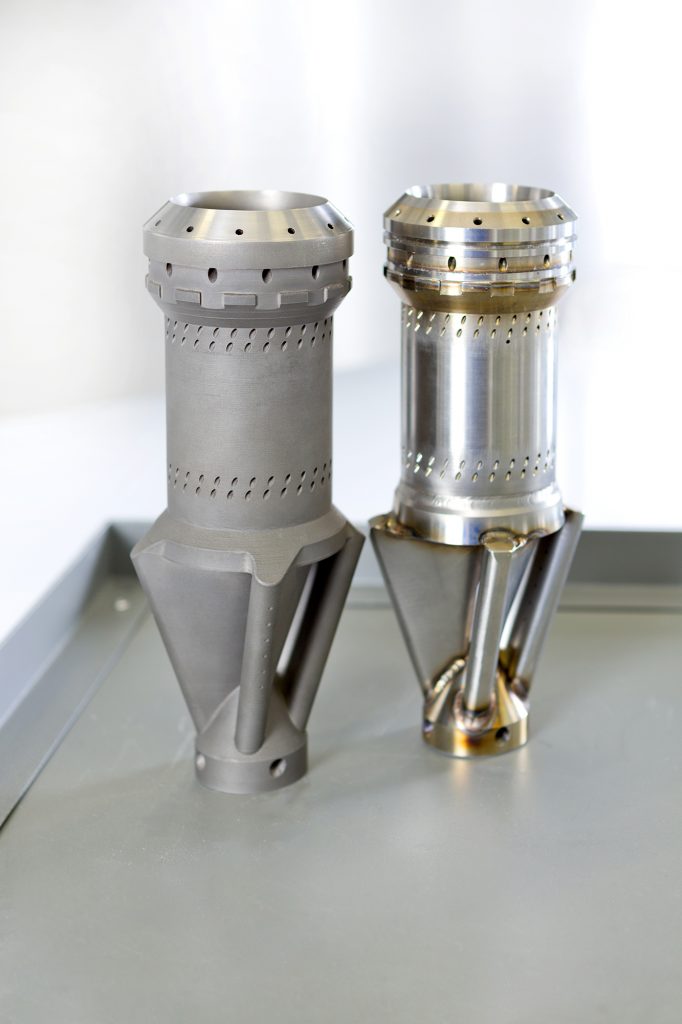 Aside from near-net shape manufacturing, the other way to reduce the embodied energy in aero components is to use recycled material. Recycled aluminium and titanium have only a 10th and a third of of the embodied energy of virgin metal respectively.

In the mid-term future, this could mean that aircraft manufacturers rather than aircraft owners might be made responsible for dismantling and recycling planes at the end of their lives.

This may mean an end of the aircraft ‘boneyards’ in the Arizona desert, which are still used by the US Air Force and several US airlines to store planes at the end of their lives.

“Imagine all the embodied energy in the high value materials of those thousands of planes rotting in the desert,” he said. “Not recovering & recycling those materials might have been economically acceptable in the past, but it isn’t going to be acceptable in the future.

Do you want to explore more Seco solutions in the aerospace segment? Click here

Why making an aeroplane pylon is a true collaborative process.

Aeroplane pylons keep the aircraft’s engines attached to its wings. Today, the development of such a critical component involves a...

Towards a leaner and greener aviation industry

Traceability has long been one of the most important issues for the Aerospace industry. Now the task has just become...

The pandemic led to a spate of postponed and cancelled surgeries that temporarily depressed the global market for knee implants....

Is this the future of orthopaedics?

The development of smart implants for use in orthopaedic surgery has the potential for making dramatic improvements to patient diagnostics....